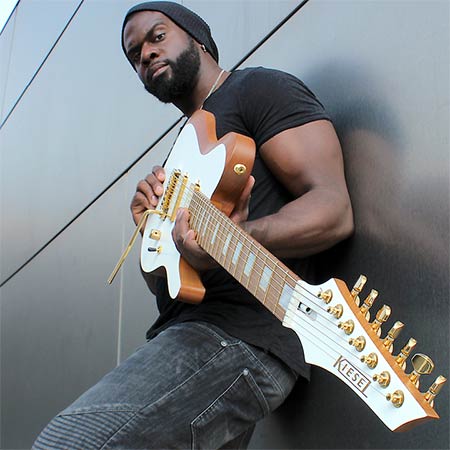 "These boards are truly amazing. We've been using these units for two tours and several shows now and all we can say is WOW. There's nothing like a durable, reliable, versatile, and portable piece of hardware to truly bring your sound to life on stage and in the studio. These boards are lifesavers!"

Al Joseph has amassed a loyal following allowing him to become one of the worlds most exciting Progressive Metal Guitarists. One could say his musical style and influences transcend his humble and traditional upbringing. He began his Professional Career as the lead guitarist after his brief time at world-renown music school Berklee College of Music. His 2013 debut record, "Out In The Open" caught the attention of Jan Cyrka, legendary artist and founder of Jam Track Central. Jam Track Central works with some of the world’s best guitarists and teachers to provide its members with a depth and range of guitar playing knowledge and technical understanding. Al shares the digital stage with highly respected world-renowned players including Guthrie Govan, Alex Hutchings, Andy James, Jack Thammarat, Marco Sfogli, Kiko Loureiro, Jeff Loomis and many more. After their very first meeting Jan invited Al to join the Team.

Al’s quest to give a "voice" to his personal exploration and expression resonates with sounds of Progressive Metal bands like Dream Theater, Frost*, and Symphony X and Nu Metal bands like Creed, Rage Against The Machine, P.O.D, Pillar, Pantera, and Sevendust to the lyrical textures of Jimi Hendrix, George Benson, Joe Satriani, John Petrucci, Andy Timmons, Steve Vai, and Greg Howe, Al formed his style and openly pays homage.

It's only the beginning...