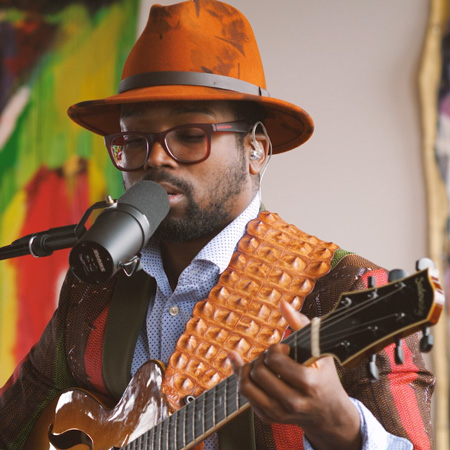 "HeadRush Looperboard is truly a dream come true for creative and professional musicians that are looking for simplicity, intuitive and creative tool with the highest sound quality in a compact body. I am learning every day the magic of the Looperboard."

Albino Mbie is an award winning Musician, Guitarist, Singer, Composer, Sound and mixing engineer born in Maputo, the capital of Mozambique, a country in southern Africa known for its rich musical and cultural heritage. Fueled by the resourcefulness and determination that have always characterized Mozambicans, he built his first guitar at 16 from a 5-liter can of oil, scrap wood, and strings made out of electrical cords.

Drawn to the sounds of neighborhood street musicians in Maputo, Albino began to play in a number of local bands. As with his home-made guitar, Albino wanted to combine styles and incorporate diverse elements in his music. For his talents to grow, he knew he needed experience new places, cultures, and sounds.

While studying music education and Performance at Universidade Eduardo Mondlane in Mozambique, he heard about the Berklee College of Music in Boston, USA, where he could expand his musical horizons. Soon after, Mbie was one of the first students to receive a full scholarship to Berklee through the African Scholars program. In 2009, he settled in Boston, Massachusetts.

At Berklee, he was exposed to a variety of influences, but wanted to go deeper into the roots of jazz and expand his knowledge of music. He auditioned and was selected to participate in the Berklee Global Jazz Institute, which is directed by Danilo Perez and the residency teachers, including Joe Lovano John Patitucci, and Terri Lyne Carrington. The Institute emphasizes an artist's original vision in jazz, and has helped Mbie find his own unique voice in the art form.

Albino still felt the absence of his own Mozambican traditions in his music. With the help of his mentors, Richard Bona and Lionel Loueke, two of the most prominent African musicians in the United States of America today, he began to bridge that gap.

Today, Albino's music succeeds in combining many disparate parts into an organic whole. It incorporates his musical experiences from Mozambique, the U.S., and many other places around the world, combining rhythmic patterns and musical concepts to create a unique Afro-Pop and Moz-Jazz sound. He will always continue to combine and capture the energies of different musical traditions to create a unified and original musical style.

He graduated from the Berklee College of Music in Performance , production music and sound engineering and Minor in acoustics and electronics in 2013.

“Ngoma Mozambique” Warded “revelation prize” of the year of 2013/14

3 Awards as mixing engineer for Mozambican artists Mr. Bow for the popular song of the year

How Do You HeadRush? - Featuring Albino Mbie