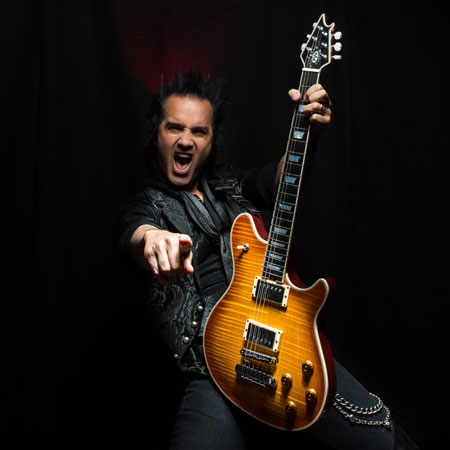 "Touring the world for the last 30 years, one of the most important things to me is a great sounding, reliable rig. The Headrush gives me everything I need and more. Whether I’m rocking Stadiums, Arenas, nightclubs or in the studio ...I have more amps, effects and options than I could ever dream!!!"

Steve Brown was born and raised in New Jersey destined to live a life submersed in music. The mostly self-taught artist picked up his first guitar at 9 years-old and never looked back. Steve began his life-long love affair with live performing at the ripe old age of 12, when he became a regular on the voltaic NJ rock scene of the 1980’s. At 12 years-old, he began writing music, lyrics and founded his first band, TRIXTER. It wasn’t long before Steve led the mighty TRIXTER to a record deal with MCA records, sold out Arena Tours and living every aspect of the rock and roll dream.

In his over 35 year career, Steve has sold millions of records worldwide (RIAA Certified Gold Album), written 3 BILLBOARD Top 100 Singles, starred in 3 #1 MTV Videos, and shared the stage with the likes of KISS, JOURNEY, ALICE COOPER, SCORPIONS, POISON, CHEAP TRICK,STYX, BOSTON, NIGHT RANGER, RICK SPRINGFIELD and TESLA. As not only a master guitarist, but as an accomplished songwriter, singer, engineer, producer, and performer. Steve has become one of the music industry’s most sought-after and entrusted talents. From personal endorsements by Eddie Van Halen to churning out original music for some of television’s most popular hits, to regularly hitting the stage with an ever-growing list of rock and roll greats, Steve Brown is in constant demand. Most recently, Steve has played with DENNIS DeYOUNG (formerly of STYX), JOE LYNN TURNER (formerly of RAINBOW, DEEP PURPLE, YNGWIE MALMSTEEM), on BROADWAY in the hit musical “ROCK OF AGES” and as the featured guitarist in the THE EIGHTIES STRIKE BACK SHOW with RUBIX KUBE. In 2013, Steve was invited to be the vicarial guitarist for the legendary DEF LEPPARD, which led to him joining the band at the historic Wembley Stadium along with many other Arena and Stadium shows thought North America. In May of 2018 he pulled off a job never done before when he was called in with 24 hours’ notice to aid Phil Collen for 3 shows. Thus giving him the distinct honor of covering duties for BOTH Def Leppard guitarists. A stunt he would later repeat in early 2019 for Dennis DeYoung. This has never been done before in the illustrious world of rock. A true testament to Brown's talent, loyalty and love for his craft. Steve currently fulfills his gigs with DENNIS DeYOUNG, WIZARDS OF WINTER,DANGER DANGER ,ERIC MARTIN(Mr. Big),RUBIX KUBE, Comedian JIM BREUER,BROADWAY’S ROCK OF AGES BAND,TOKYO MOTOR FIST and DEF LEPPARD, while continuing to cultivate his ever-expanding expertise, experience and true passion for all that is music.

How Do You HeadRush? - Featuring Steve Brown